One of the most useful tools for monitoring absenteeism by HR Managers is the Bradford Factor scoring formula used to track unplanned spells of absence from the workplace. Frequent short-term sick absences can be a huge concern and cost, particularly in a small business, where their effect is often more pronounced because the workforce is smaller and the Bradford Factor helps measure the scale of this short term absenteeism.

Using a relatively simple mathematical formula, it helps employers and HR teams understand sudden absences easily. The formula works by applying relative weighting to the frequency of absences and the number of days taken off. It works on the basis that repeated absences have more of an impact on your daily operations than long-term sicknesses. For example, one week-long stint of unplanned absence isn’t as costly to business as someone taking the same number of days off over multiple separate occasions.

Is it a fair system?

This method provides a strong and objective insight, so HR can determine if and when to take any action against employees for poor attendance. The mathematical nature of the Bradford Factor means that everyone is measured against the same yardstick, making it a fair way to track absence patterns.

One particular caveat, however, is that employees are entitled to take time off for any care issues of their dependents. Whether their child needs taking to the hospital or an elderly relative’s care worker isn’t available at the last minute, such unplanned absences shouldn’t be included in the calculations of their Bradford Factor score.

The system is also flexible, allowing employers to set slightly different trigger points for employees with mitigating circumstances, such as existing medical conditions or disabilities. Those who are more likely to take sudden and unexpected days off at different times should have their specific situations taken into account before employers pursue any disciplinary action. 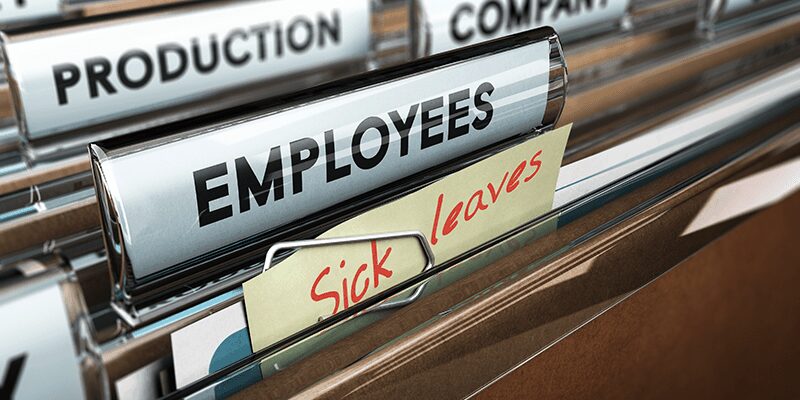 How to use the Bradford Factor

The Bradford Factor uses a fairly simple formula, presented as S² x D = B where:

As the number of separate instances is squared, this has a significant effect on an employee’s overall score. For example, one week-long absence would be calculated as (1 x 1) x 5 = 5.

However, someone else may take the same number of days off but spread them out with a couple of days here and a couple of days there. Being absent on three separate occasions would affect their overall score like so: (3 x 3) x 5 = 45.

As such, the higher the score, the more likely that disciplinary action might be necessary. There’s no universal rule that you need to stick to, so employers can set their own scales as they see fit. As a guideline, point brackets could be spaced out as follows:

Utilising Bradford Factor for your business

While it’s not a requirement for employers to use the Bradford Factor, those who do find it to be a very useful tool in tracking time and attendance in their workforce. By using the formula alongside integrated Absence Management Software, you and your HR team can easily review the impacts of time and attendance, as well as use the data to improve your overall operations.

With Platinum Enterprise from Addtime, you can monitor and record absenteeism – whether planned holidays or unplanned sicknesses using an all-in-one software system that’s fully compatible with the Bradford Factor methodology.

Keep operational costs low and productivity high by identifying absence trends quickly & easily with Platinum Enterprise from Addtime, call us today on 01942 272 061 or get in touch online through our contact form.

Addtime
5.0
Based on 7 reviews

Marcin Czerniawski
11:41 21 Mar 22
Northern Diver International has been working with AddTime for over a decade now.We were always impressed with company... responsiveness to support requests and deep knowledge about the Time Management Systems.Our current software and terminal came to end of life and Northern Diver Intl was in need of upgrading it’s software and terminal.The company we chose for this project was AddTime Support. We worked with Mr Tim Groves – Sales and Business Development Manager and Mr Matt Downing lead engineer on this project.AddTime understood company needs and helped scope the project. Mr Tim Groves visited our site and discussed the system. New TMS was presented to us and all options discussed. Thanks to Mr Tim Groves pro active approach company decided to invest in AddTime latest bio metric technology. This offered business lots of flexibility and improved system processes. We found product and Addtime offering competitively priced.Thanks to new software and hardware company managed to enhance and improve its reporting and payroll processing times. Accuracy of reporting improved and time saving was achieved.Software and hardware installation was coordinated with Mr Matt Downing who impressed business with his knowledge and experience with the system. In 1 week system was fully operational. Mr Downing was great to work with and addressed all enquiries in a timely manner.Northern Diver Intl Ltd is really happy with choosing AddTime for this project.Addtime is very efficient with responding to all our enquiries and helps with improving company processes.Marcin Czerniawski | Financial ControllerNorthern Diver Intl Ltdread more

Matthew Nunns
11:10 21 Jul 21
Had the pleasure of working with the Addtime team to assist with implementation of a new clocking system for a mutual... customer. The team were fantastic and we had no complaints from anyone involved, the system is now up and running with a raft of features that the customer didnt have before.read more

Horace Spooner
15:24 19 Jul 21
I contacted Peter from Addtime regarding a new clocking on machine for the lads in the works.Peter offered me some... great impartial advice as to which clocking on machine was best suited for our company.After placing the order for the particular model we wanted Peter advised me of the lead time and installation date.Peter arrived with his co worker on the advised installation date as agreed and installed the new clocking on machine.I was very impressed with the service received, everything went to plan as advised by Peter and I have to say what a professional outfit this company is Peter did a great Job and was very tidy, no mess left to clean up a credit to the Company.Peter took the time to go through all the various scenarios regarding the use of the clocking on machine and answered all my queries to a very high professional standard.I was uncertain of a specifc operation regarding the clocking on machine so decided to telephone Peter, who went above and beyond to explain in great detail and a lot of patience of what I needed to do.Addtime are certainly a great company and I would have no hesitation in recommending them.read more

Allan Smith
10:29 25 Jun 21
Great product and the support is fantastic

Mark Roach
15:56 20 Jun 19
We have recently migrated from a manual clock card system to the Addtime Platinum Enterprise workforce management ... software.I would highly recommend the product and rate highly the team at Addtime and their professionalism, throughout the process of selling us the benefits of the solution, to assisting in design and implementation of it.M RoachFinance DirectorGeorge Roberts (North West) Ltdread more

GARY BARKER
16:08 19 Jun 19
I have had dealings with Tim at Add-Time for just over a year now and he is a pleasure to deal with and always goes out... of his way to accommodate our needs. I cannot speak highly enough and would 100% recommend this company.read more
Next Reviews